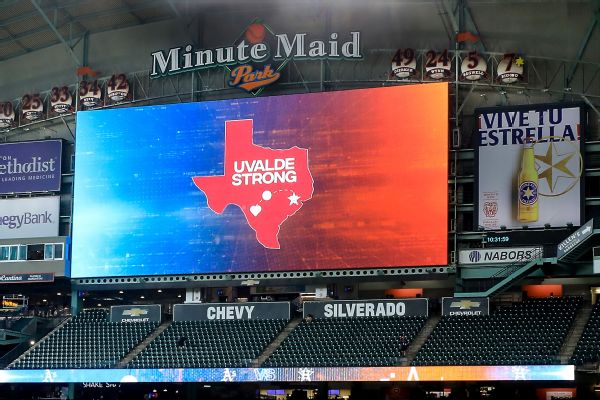 Hours after representatives of the Houston Astros hosted members of Texas’ Uvalde community for a pregame event on Sunday, Alex Bregman delivered on one young fan’s request for a home run.

Bregman’s 16th homer came in the first inning off Cole Irvin and staked the Astros to a 2-0 lead over the Oakland Athletics.

“As soon as I got into the dugout, Dusty (Baker) goes, ‘Hey, you hit one for Uvalde!'” said Bregman, who also contributed an RBI double in Houston’s 6-3 victory.

The Astros chartered 10 buses to bring 500 family members and friends of the victims of the May 24 mass shooting at Robb Elementary School to Sunday’s game for “Uvalde Strong Day.”

A little girl who was at the school at the time of the shooting didn’t have a question for Altuve, but rather a request. Wearing a shirt that read “Team Altuve,” she asked the star second baseman to hit a home run for her.

While it was Bregman who came through with the home run, Altuve followed by doubling home two runs in the second inning as the AL West leaders built a big early lead en route to their fourth consecutive victory and a sweep of the Athletics.

The 500 people were part of a group of about 3,000 from Uvalde who received free tickets from the Astros to attend the game.

“It was great … just to have them here to be able to watch an Astros win,” said Bregman. “Hopefully they had fun at the game and enjoyed it; hopefully they can continue to have fun watching Astros baseball for years to come.”

Faith Mata, whose younger sister, Tess, was one of 19 children killed in the shooting, threw out the ceremonial first pitch at Minute Maid Park.

Baker said he hoped the day could provide the families a small distraction as they continue to deal with the tragedy.

“This is what we’re here for,” he said. “We’re not only here to play ball for our town, for ourselves, for our teammates, we’re here to aid the healing of people.”

The team had several fundraising efforts at Sunday’s game with all the proceeds going to help those affected by the shooting.

“It was really cool, just anything we can do for them,” said Bregman. “I’m glad they were here today … I think it’s really nice what the Astros have done to try and help the healing process.”