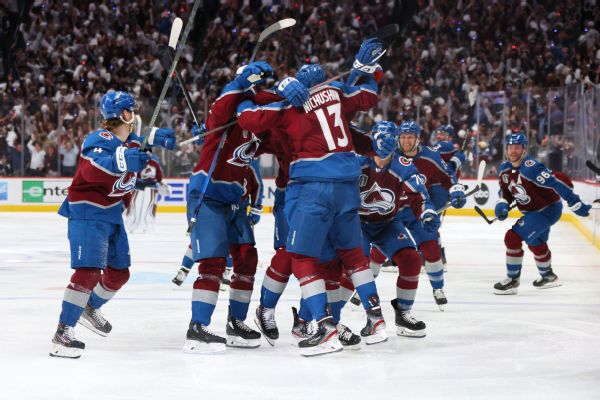 DENVER — Andre Burakovsky was like a kid on Christmas morning before Game 1 of the Stanley Cup Final on Wednesday. Only he ended up delivering the gift.

Colorado’s big winger scored the game winner in overtime to lift the Avalanche past the Tampa Bay Lightning 4-3 for a 1-0 lead in the series. Burakovsky is one of only two Colorado players — along with Darren Helm — to have won a Cup before, back in 2018 with the Washington Capitals. That experience hasn’t lessened his excitement to be back competing for a championship, or to be making an impact.

“I was kind of nervous, had a little trouble sleeping last night,” Burakovsky said. “I woke up at 6 in the morning and couldn’t wait for the game. I feel like I’ve been there before and know the situation and know what is at stake.”

Gabriel Landeskog, who also scored in Colorado’s victory and was sharing a podium with Burakovsky for the postgame news conference, couldn’t help but gently mock his teammate’s enthusiasm.

“Just wait until you have kids,” Landeskog said. “You’ll be up at 6 every day.”

Burakovsky knew going into Game 1 that he would have an expanded role for the Cup Final, and played 12:34 in a special teams-laden matchup. Nazem Kadri is still sidelined with a broken thumb suffered in the Western Conference finals, the same series in which Burakovsky blocked a shot off his leg and was forced to miss Games 2 and 3.

He was back for Game 4 and replaced Kadri on Colorado’s second line. Burakovsky said earlier this week that he hadn’t felt close to fully healthy again until recently, but it was a good sign for the series ahead. It helped that Colorado had eight days off between completing its sweep of the Edmonton Oilers in the Conference finals on June 6 and puck drop on Wednesday’s tilt.

While the Avalanche had the better of Tampa early, jumping out to a 3-1 lead after 20 minutes, the two-time defending Cup champions roared back in the second period to tie the game. Regulation ended with the sides knotted 3-3, and it took Burakovsky less than 90 seconds in that extra frame to finish the job.

“I just saw [J.T.] Compher get the puck through the neutral zone and win battles,” he said. “And I tried to get out as quick as possible and then obviously Val [Nichushkin] got the puck back in and made a great play to me and it was up to me to shoot it.”

It was only Burakovsky’s second goal of the postseason, and his first since he lit the lamp in Game 4 of Colorado’s first-round series against the Nashville Predators. Burakovsky’s lack of production lead to him being scratched for a pair of games in the Avalanche’s second-round matchup with the St. Louis Blues. He made it through that adversity, same as he did the recent injury, and coach Jared Bednar liked what he saw from Burakovsky across the board in Wednesday’s win.

“I thought he was really solid tonight,” Bednar said. “Managed the puck really well. Didn’t have any turnovers. Checked hard. Was getting above pucks. Skating well. That’s what Burky can do. You put him in a spot, and he can finish. He’s a streaky scorer, and when he gets opportunities, he can put the puck in the net. All-around game for him tonight. I thought it was really strong.”

Burakovsky might not score a lot, but historically his postseason contributions are quite timely. When Washington was on its Cup run, Burakovsky scored a pair of goals in Game 7 of the Eastern Conference finals — also against Tampa Bay — that punched the Capitals’ ticket to the Final.

Now he’s gotten to be a playoff hero all over again and put Colorado three wins away from hoisting the Cup.

“It was kind of a crazy feeling,” he said. “Just ready to be here in this Final and help the team win a game and it was a nice feeling for sure.”