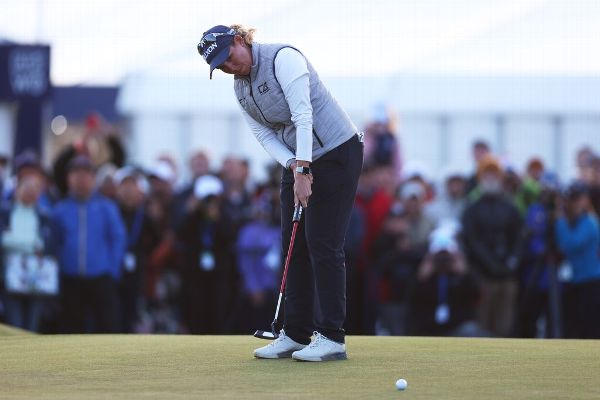 MUIRFIELD, Scotland — Ashleigh Buhai recovered from throwing away a five-shot lead at the Women’s British Open by beating In Gee Chun in a playoff Sunday to win her first major title.

With the light fading, the South African golfer made a superb bunker shot on the fourth playoff hole to leave herself with a short par putt, while Chun settled for a bogey.

Buhai calmly rolled in from less than three feet and then clutched her face in relief, before being drenched in water and other beverages by her entourage.

She made things a lot more difficult than they had to be, though.

Buhai entered the final round with a commanding five-shot lead and was still three strokes ahead before a triple bogey on the par-4 15th that put her level with Chun.

She then missed a birdie putt on the par-5 17th that would have restored a one-shot lead. Both players missed long birdie putts on the 18th as they settled for a playoff after finishing on 10-under 274.

Hinako Shibuno of Japan, the 2019 champion, finished one shot back in third after missing a chip from just off the green that would have made it a three-way playoff.