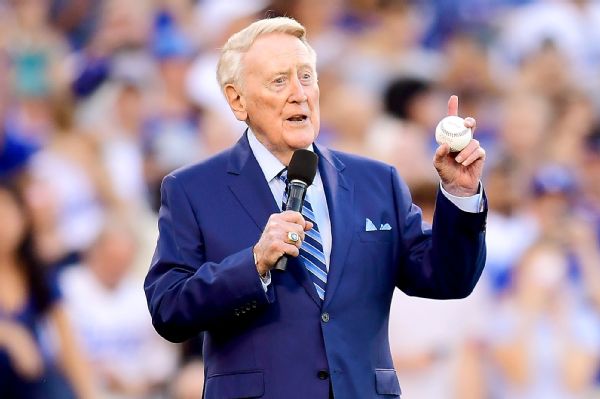 LOS ANGELES — The Los Angeles Dodgers will pay tribute to legendary broadcaster Vin Scully by wearing a commemorative black patch featuring a microphone and “Vin” on their uniforms.

Scully, whose 67-year career calling games in Brooklyn and Los Angeles made him the longest-tenured broadcaster with a single team in sports history, died Tuesday night at age 94.

The Dodgers are out of town until Friday but will honor Scully with a pregame tribute that night.

On Wednesday, he was celebrated and remembered by fans throughout L.A. Some recalled his voice soothing them to sleep as kids.

“It was like listening to your favorite song on the radio all the time, he was always in the background,” said George Esteves, a 58-year-old from Sierra Madre.

Added Mitch Hammontree, a 68-year-old fan from Placentia, “He painted such a picture, you didn’t need a TV.”

Others recalled Scully as a bridge from one generation to the next, including 29-year-old Kenneth Walls of South Los Angeles who tuned in alongside his 90-year-old grandfather.

“He’s been a part of my life since I was born,” Walls said. “Having this opportunity to share this moment with the fans is really important. It’s more appropriate to be in a celebratory mood for such a long, beautifully lived life.”

At one point, a tiny green-colored bird alighted on a Dodgers cap nestled among the flowers.

Diana Gutierrez of Downey brought her 8-year-old grandson to view the collection of mementos that included a blue-and-white Dodgers serape, baseball-shaped balloons and baseballs resting on top of the D and tucked in the V on the welcome sign at 1000 Vin Scully Ave.

“My grandson was saying this morning, ‘He’s such a nice person to everybody,”’ Gutierrez said. “I said, ‘Absolutely, that’s definitely a good memory to leave behind and that’s something to be proud of in Los Angeles.”’

Along Hollywood Boulevard, tourists and locals paused at Scully’s flower-strewn star on the Walk of Fame located two doors down from another legend, Musso & Frank Grill. A delivery man hung an arrangement of roses and other flowers in Dodgers colors on a wooden easel.

Back downtown a few miles from the stadium, the weekday lunch crowd was already in line at Philippe The Original.

“I was almost in tears,” 75-year-old Daniel Mirgil of Pomona said of hearing Scully had died. “We used to use our transistor radio just to listen to him.”

Los Angeles City Hall will be lit in blue starting Wednesday night. ESPN2 is re-airing Game 1 of the 1988 World Series featuring Scully’s memorable call of Kirk Gibson’s pinch-hit, walk-off home run that led the Dodgers to a win over the Oakland Athletics.

The self-effacing Scully would have appreciated the tributes but would have likely found them to be “a little bit embarrassing,” which was how he described the hoopla surrounding his retirement in 2016.

“I’ve never wanted to get out in front of the game,” he said then.

Moments of silence were held in Scully’s honor around the majors Wednesday.

“It’s the end of an era,” Hammontree said. “You think he’s going to live forever, and of course his legacy will.”