INDIANAPOLIS — Saint Peter’s coach Shaheen Holloway stood on the sideline with his arms crossed and showed no emotion as guard Matthew Lee made two free throws to give the Peacocks a four-point lead over Kentucky with 20 seconds left in overtime of their first-round game in the NCAA tournament.

Holloway didn’t show emotion because he believed his team would be in position as the No. 15 seed to knock off the No. 2 seed Wildcats. And that’s also why, as the final buzzer sounded in Saint Peter’s 85-79 victory over heavily favored Kentucky, Holloway didn’t celebrate, he simply got his players together to shake hands with the Wildcats.

“Proud of my guys for battling, like we do all year,” Holloway said. “This is something that these guys understand, no disrespect to anybody, but we wasn’t coming down here just to lose. We came down here to fight and we did.”

To those outside of the program, Saint Peter’s wasn’t supposed to stand a chance against the Wildcats. Not a program from a school in Jersey City, New Jersey, with an enrollment of about 2,300 students, that plays in the Metro Atlantic Athletic Conference and entered Thursday as an 18.5-point underdog. But it was the Peacocks who gave John Calipari his first opening-round loss since he became coach of the Wildcats while being just the 10th No. 15 seed to win a first-round game since the tournament expanded to 64 teams in 1985.

“Putting Jersey City on the map, in New Jersey, we come from a small state,” Saint Peter’s guard Daryl Banks III said. “Probably a lot of people probably don’t even know who we are. It’s huge for our school and everybody back home.”

Peacocks forward KC Ndefo added: “We just love being the underdogs, going out there fighting, staying together, staying poised and getting the job done.” 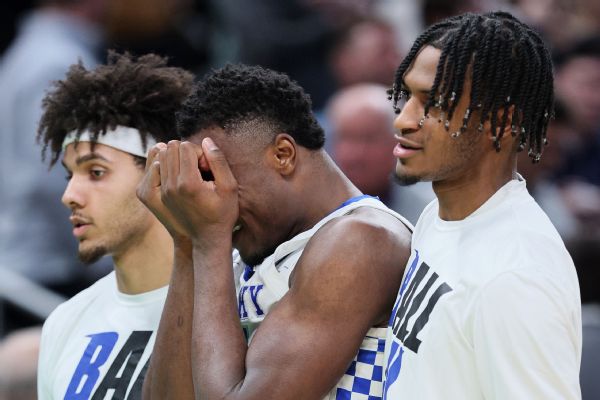 • 6th most popular team to win its first-round game
• 4th-most popular champion (more than 1-seed Baylor)
• 6.9% of brackets in the ESPN Men’s Tournament Challenge had Kentucky winning it all
• Potentially opens path for 3-seed Purdue, the second most popular 3-seed picked to win it all
• Positions 7-seed Murray State as the seeding favorite to make the Sweet 16, something only 10.7% of brackets had penciled in
— 17,357,209 men’s brackets entered on ESPN.com

Banks kept the Peacocks in the game in the first half with his 3-point shooting as he scored 16 of his 27 points in the first 20 minutes. Guard Doug Edert picked things up in the second half by scoring 15 of his 20 points in the final 25 minutes, including a runner to tie the score at 71-71 and send the game to overtime after Saint Peter’s trailed by eight points late.

The Wildcats, a favorite to come out of the East Region and reach the Final Four, didn’t enter the tournament playing as crisply as they wanted to. They had a late-season loss at Arkansas and then lost to Tennessee in the semifinals of the SEC tournament. Kentucky was 4-of-15 on 3-pointers Thursday.

“This was probably something they never felt in their lives,” Calipari said. “And that’s why I wish I had some answers with three minutes to go to help them through it to get by the first one. But I tell you what, we missed shots, and Saint Peter’s made shots. They made 3s. They made layups; we missed. They made free throws; we missed.

“It’s one of those games that I was hoping I could get it by them to get them on to the next game to get their feet underneath them, and obviously I didn’t do a very good job with it.”

Thursday could be viewed as a makeup for the last time Holloway played in the NCAA tournament. He missed Seton Hall’s East Regional semifinal loss to Oklahoma State because of an ankle injury during his senior year in 2000. Now he’s in position to lead Saint Peter’s past the second round of the tournament for the first time in school history.

“This is about the players,” Holloway said. “These guys put up with my nonsense every day in practice. This is about them. I’m so proud of them and so happy for them because these are moments people can’t take away from them. These guys came in and took down one of the biggest schools in the country, right? So they are going to remember this moment for the rest of their life. So it’s not about me.”

Napoli reload is paying off in Serie A and Champions League

Napoli are in incredible form in both Serie A and Champions League. Dean Mouhtaropoulos/Getty Images There …