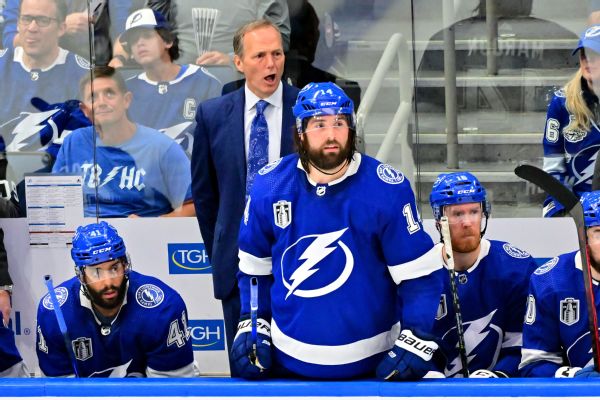 Cooper rambled for a minute on his love of the NHL and his team’s journey to back-to-back Stanley Cup championships before focusing on Kadri’s goal at 12:02 of overtime, which gave the Avalanche a 3-1 lead in the series.

“This one is going to sting much more than others, just because it was taking on … it was potentially … I don’t know … it’s hard for me. It’s going to be hard for me to speak. I’m going to have to speak. I’ll speak with you tomorrow,” he said. “You’re going to see what I mean when you see the winning goal. And my heart breaks for the players. Because we probably still should be playing.”

With that, Cooper excused himself after a single question.

Speculation after the game was that the Lightning thought the Avalanche had six skaters on the ice before the game-winning goal was scored. There were camera angles that showed six Colorado skaters on the ice as Kadri collected a pass, skated into the zone and beat goalie Andrei Vasilevskiy for the 3-2 win.

At issue: whether Nathan MacKinnon was close enough to the Avalanche bench to be considered a “retired player” when his teammate jumped on the ice and became engaged in the play. Skaters have to be within 5 feet of the bench and out of the play before a change is made.

Too many men on the ice infractions are not reviewable, even when a goal is scored.

Fueling the conspiracy theories: The NHL handed out a score sheet to the media that had six skaters listed for the Avalanche on Kadri’s game winner and then edited that score sheet to list five skaters online.

The NHL said that additional player, defenseman Erik Johnson, might have ended up on the initial score sheet due to players jumping off the bench in celebration after Kadri scored to end the game.

Kadri wasn’t sure what Cooper’s gripe was about after the game.

“I’m not quite sure what he really was, what he was thinking of why it shouldn’t have counted. That kind of confuses me a little bit,” said Kadri, who played in his first game of the series after undergoing thumb surgery in the Western Conference finals. “The puck hit the back of the net, end of story, so not sure why he would say that.”

The beginning of Cooper’s news conference saw him speak about his team’s fast start before quickly segueing into how difficult their championship run has been while also criticizing the NHL’s salary cap system.

“You know, I love this league. It’s the greatest league in the world. The people that run it are amazing. Everything about it. It’s like a dream come true for me, especially being a Canadian kid growing up and everything that’s gone on,” he said.

“You know, I’ve been part of some heartbreaking losses and defeats to the teams that took us out, and been with a group that just fights, fights and fights. And they fought their way to a third Stanley Cup final in a row. And in a cap era when … when it’s so damn hard and the rules are put against you because the league wants parity. And I love that about the league. And that’s what makes it tougher. And just watch this team, what they’ve gone through and the battling that’s gone on. And we’re all in this together. Players, coaches, refs, everybody.”