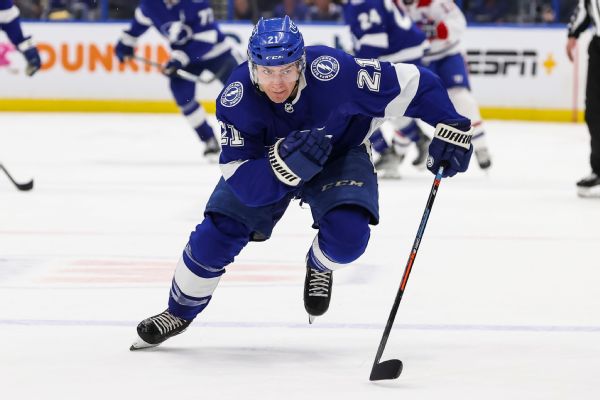 Point suffered a lower-body injury after just 5 minutes, 51 seconds of ice time in Game 7 of the Lightning’s first-round series against the Toronto Maple Leafs on May 14. He was ruled out for the Lightning’s next nine games before becoming a game-time decision in Game 6 of the Eastern Conference final, when the Lightning eliminated the New York Rangers.

His return is a huge boost to the Lightning. Point is considered one of the NHL’s top two-way players, and Tampa Bay faces the Colorado Avalanche, the highest-scoring team in the Stanley Cup playoffs.

Point had four points in seven games in the opening round. No player has scored more goals (30) than Point has over the past three NHL postseasons, and he has 60 points in 53 games during that span.

Where Point slots into the lineup will depend on the status of winger Brandon Hagel, who Cooper said is questionable for Game 1.

Hagel had been playing on an effective checking line with center Anthony Cirelli and winger Alex Killorn. Point could move into that spot if Hagel is scratched. If Hagel does play in Game 1, Point could slot in with forwards Nick Paul and Ross Colton, with whom he has skated in practice. Point saw time with the Lightning’s first power-play unit in practice.

“Our lines have changed during the playoffs,” Cooper said. “What we start with today maybe won’t be what we end up with by the end of the game, let alone by the end of the series. A lot of it is [depends on] who is going to be in. Hopefully we have everybody in, but it’s too early to tell.”

Point said Tuesday that jumping right back into the speed and tempo of the Stanley Cup Final after missing two rounds of the playoffs won’t be easy.

“Any time you’re coming back, you can’t replicate the timing and whatnot of playoff hockey in a practice,” he said. “It just doesn’t happen. It’ll be an adjustment for sure. But it’s the playoffs. You gotta do everything you can to be a positive addition to your team.”

The Lightning have won eight out of 10 games in his absence, earning a third straight trip to the Stanley Cup Final, which begins Wednesday at 8 p.m. ET on ABC and ESPN+.

Previous Hailey Bieber opens up on her and Justin’s health scares, relationship
Next U.K. Vows to Press Ahead With Deportations to Rwanda

WNBA star Brittney Griner makes direct appeal to President Biden for her freedom, asks in letter to ‘please don’t forget about me’